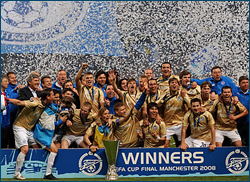 I am a big soccer fan. My team is FC Zenit St Petersburg (Russia). It is a good team (holder of UEFA Cup and UEFA Super Cup 2008, Champions of Russian Premier League 2007, 2010, and 2011-2012), but it didn’t win the Russian championship in 2012-2013 (coming to the end just one point short), and now that they have instituted a joint tournament between the most popular soccer teams of Russian and Ukraine it has already lost two (of the first) games: 0:1 in the game against FC Shakhtar Donetsk, and 1:2 agaist FC Dynamo Kyiv.

Tomorrow they are playing their third game in the tournament, but the team spirit is at an all-time high. Everyone at FC Zenit is optimistic, and ready to fight to the end. Knowing them I am also fully confident that their chances of finishing (this tournament) well are pretty high.

Why am I so confident?

Because I have come to treat defeats as an integral part of success. Any business(man)/(woman) can learn a ton from athletes here. I’ve mentioned soccer already; but here’s how the legendary Michael Jordan once put it:

I’ve missed more than 9,000 shots in my career. I’ve lost almost 300 games. 26 times, I’ve been trusted to take the game winning shot and missed. I’ve failed over and over and over again in my life. And that is why I succeed.

Remember how Steve Jobs was raising back up from his failures? Remember what he achieved as a result?

Failures and defeats should be treated as opportunities for learning and strengthening, not as excuses for whining or quitting.

The wise Sir Winston Churchill is known for saying:

Success is going from failure to failure without loss of enthusiasm.

So don’t let any momentary failure get in the way of your longer-term success. Press on… Don’t lose passion (or optimism)… Overcome, persevere, and succeed!