My name is Evgenii [yiv-ghe-niy]. I am an ethnic Russian, born and raised in the former Soviet Union, within Russian culture, traditions, and ways of doing things.

Even though I have not lived in my hometown (of Kishinev, Moldova) for the last twenty years (and am a citizen of the United States which I call home now), I had an honor of living in St. Petersburg, Russia for five years, and this is where we consistently spend at least a month of every year.

I haven’t told anyone (until this post), but while I’ve written books on marketing, my livelong dream has been to write a volume on the Russian mindset. In it, I would delve into why Russians act the way they act, and what a foreigner should know about them — to understand and appreciate them.

Having heard of yet another American friend planning a trip to Russia, I started thinking of quick things she should know about Russia and the Russians — to make the most of her trip. As a result, my list of comments grew from a handful of tips to fifteen things to keep in mind as you plan your trip to “Mother Russia”. Here they are (in no particular order):

“Hi! How are you?” or “Hey! How’s it going?” is a commonplace greeting, but not Russia. Many Russians would argue that when/if they ask someone how they are doing, they really mean it. Equally, when they are being asked the same, their response may go much deeper than “Fine, and you?” Unless you’re ready for it, I suggest you drop that second part of your customary greeting and go with either Privet (Russian for “Hi”) or Dobroye utro, dobry den’, or dobry vecher (literally: “Good morning”, “Good day”, or “Good evening”).

This one is closely related to the previous point. Unless it’s a relative or a very dear friend that you’re meeting, Russians do not hug. 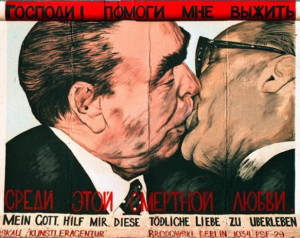 Neither do they kiss like the infamous Berlin Wall graffiti depiction of Brezhnev and Honecker may presuppose.

Jokes aside, a handshake is a typical element of greeting. What’s important is that you shake hands not only upon meeting someone for the first time, but every time you meet them, especially among men (see the point about women in #11 below).

Remember also that if you are greeting someone with a handshake while sitting, make sure to raise your butt at the moment of the handshake!

Be it because of their communist history or their generally reserved character, but, unlike westerners, Russians do not smile when making an eye contact with a complete stranger. In certain scenarios, your own smile may even be translated as flirting. 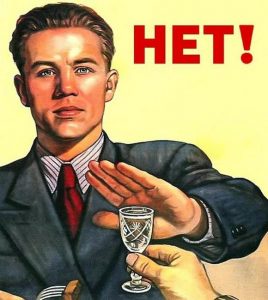 When a Russian declines an offer (be it of a bottle of water or another “treat”) it may not necessarily mean that they do not want it. It’s a customary sign of “politeness”.

You gotta be sensitive to this and gently offer again. A third (no, not second) decline typically means they really do not care for it.

5. What They Drink in Russia

When you ask for water, do clarify if you want still one (not carbonated or “without gas”). Keep also in mind that it will be offered without ice, unless explicitly asked.

When it comes to alcoholic drinks, the great European grape/grain divide should be kept in mind. If you’re in the south of Russia (or former Soviet Union), wine may be worth tasting. Otherwise, they’ll stick to such grain-based drinks as beer and vodka. Keep in mind that there will be no chilled glasses for beer there (or beer sampling), and never even think about watering down your vodka with ice (it will be served very cold as it is, and sometimes in a chilled shot glass)! Speaking of wine, it is seldom to witness it served at the right temperature, unless you’re in an upscale restaurant.

6. What to Eat in Russia

Since the water used in cooking is going to be different from what you are used to, bring plenty of Tums (or similar digestion helpers), and be ready to use them. 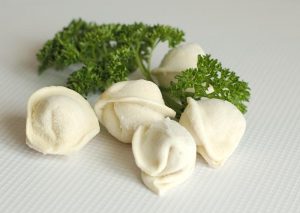 When ordering food, I recommend going for what’s sourced locally. Instead of a steak, try a kotleta. Also pyure (mashed potatoes) will always be better than french fries. And don’t forget about such staples of Russian cuisine as:

Speaking of food and eating, no one expects you to leave a 20% tip (so common in the USA). Somewhere around 10% (rounded up to an easier amount) would be sufficient. In cash, please!

However obvious the above header may sound, it’s worth emphasizing: English-speaking Russians are fairly rare. Unlike in Scandinavian countries or the Netherlands, you’ll be lucking to meet an English-speaking waiter or grocery store assistant — especially outside of a big city.

Any nation appreciates you trying to speak their language, and Russians are no exception here. Do learn some basic words and phrases and you’ll be appreciated. It’ll help you with ice-breaking too!

If someone invites you to visit them at their home, it’s a good idea to bring something with you (be it a bottle of wine or a box of candies). Flowers to the ladies in the house will always be a nice touch, too. 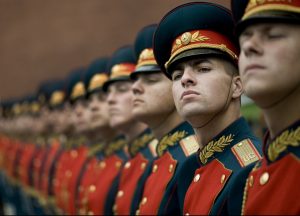 Baseball hats indoors are an absolute no-no. In certain cases it is okay for a woman to wear something on her head while inside, but in no case for a man.

Speaking of which: ladies, when you check out an Orthodox Christian church, make sure to cover head before entering it.

The “rules” that Russians have could take a book of its own, but here are just a few that come to mind (as the more common ones):

Oh, and speaking about rules, be very careful crossing the street at pedestrian crosswalks! You might get run over, as not every car will stop at those. Don’t ask.

Whatever price you see on the price tag will be the price that you’ll have to pay. They do not add any sales tax at checkouts there.

There are too many superstitions to mention in one paragraph (which is intentionally numbered “13” here), but here are some of the most common ones: 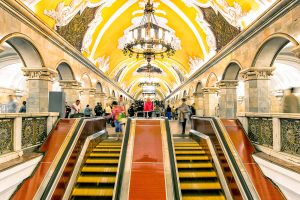 If you are planning a visit to Saint Petersburg or Moscow, you must check out the metro! Many of the stations are nothing short of extraordinary in their design and decor. And seeing them won’t cost you a penny more than a regular metro token.

Most Russians are actually very warm (somewhere deep inside), sincere, and kind people. If they let you into their heart, you will become friends forever. Respect them, honor their culture, and their ways of doing things, and you’ll have a trip of your lifetime!!

I’m sure there’s more to add to this list. Please do submit your comments and experience(s) using the respective field under this post. Anything that will help travelers to Russia have the best trip ever would be great to have here.