On December 11, 2012 Facebook rolled out a new feature. A little too late for pre-Christmas shopping, but they have made it possible for “everyone in the U.S.” to receive gifts from friends [original announcement here]. Of course, 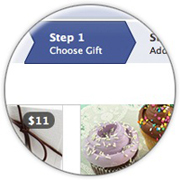 the friend would have to pay for the gift. That’s the whole point of the exercise. Long gone are the days when we all wondered how (wasn’t the better question “when”?) Facebook is going to monetize their massive membership base.

On the same day TechCrunch‘s Josh Constine ran some numbers and concluded that “Facebook could earn up to $1 billion a year from Gifts” [more here]. His higher-end estimate was based on Facebook earning 20% per purchase. Knowing a bit about what various merchants pay through their affiliate programs, I, actually, think that Facebook’s average cut is closer to 10% here. While they do feature some products from higher-paying niches (e.g. magazine subscriptions, T-shirts, sunglasses, gift baskets) which may yield 20% in “commissions” to Facebook, the majority currently featured merchants do not really pay as much as that. The more common range would be 5%-6% (e.g. Target, iTunes, Cheryl’s) to 7% (e.g. Starbucks) or, maybe, 10% (e.g. Brookstone).

But whether they are going to reap $510 million or $1.02 billion is really irrelevant. The idea itself is great, and represents a perfect example of a well-built social commerce campaign. Here’s a screenshot of how I saw it earlier this morning:

This is one beautifully-crafted social commerce campaign (from which we can all learn something). It is:

(2) Relevant — He is my friend, and I am a perfect “target audience” for gift buying.

(3) Convenient — I can buy my gift right there and then (out of their selection of gifts) without having to search elsewhere.

(4) It incorporates compelling Social Proof — My others friends, whom I trust, “have used Facebook Gifts” already. What am I waiting for?

Now, if you’ll excuse me, I have to go check my own social media or other online marketing initiatives — to see how they compare with what Facebook is doing with Gifts. I’m sure I’ll find plenty of things to tweak.