Earlier this morning I’ve spoken in Riga, Latvia at iLive Internet marketing conference. However, I didn’t have to fly over the Atlantic for this one. This was my first time to present via video conferencing (see image by Dāvis Zeps below). 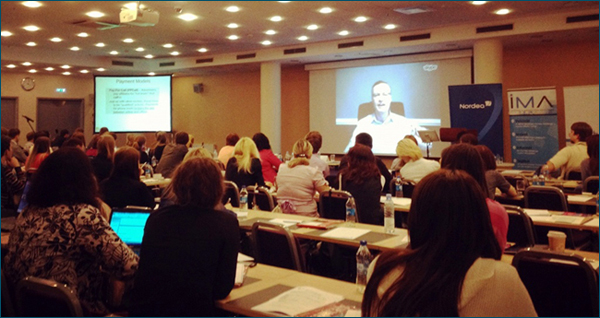 I’ll be honest with you, I was somewhat nervous about the whole idea (strangely, I would much rather be on the stage than in front of a web camera). However, after seeing that now and then others are doing this — e.g.: Bryan Eisenberg at GPeC (Gala Premiilor e-Commerce) 2011 in Romania, Smithsonian’s Michael Edson doing a number of his presentations via Skype — I decided to give it a try.

And it went very well. I would still much rather be on stage; but taking into account the time, money, and energy saved on not undergoing the transatlantic travel, it may be a good alternative in some situations.

Apparently, the audience accepted it well too; and even liked it (the first of the below tweets called it “the best presentation” of the day):

Great presentation by @ePrussakov at #ilive2012 about affiliate marketing.

What do you think of video conferencing as an alternative to in-person presentations?