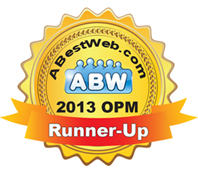 While some would rank “best affiliate marketing companies” monthly (often bundling up affiliate program management (or OPM) agencies together with affiliate networks and other vendors in the space), it is the yearly rankings that are most honorable, in my opinion.

There are several of these around — from network specific to industry-wide ones. Among the latter ones in the U.S. are Affiliate Summit’s Pinnacle Awards and ABestWeb’s “The Best Of” Awards.

Myself (and my company, AM Navigator) had the honor of making the list of finalists for Affiliate Summit’s awards (including the 2013 inclusion in the “Affiliate Manager of the Year” category), but it’s been some time since AM Navigator was last nominated for “The OPM of the Year” award at ABestWeb.com. After holding the award for three years in a row (2006, 2007, and 2008) I was thrilled to see us nominated again for 2013.

The voting closed yesterday, and I am happy to see that we, actually, came as #2 (gathering near 30% of all votes):

Thanks to Kush of VM Innovations (who himself holds an Affiliate Manager of the Year 2014 Pinnacle Award from Affiliate Summit) for his nomination, and big thanks to everyone who voted for me, my work, and my business here.

Congratulations also to Greg Hoffman for winning this one, and to all the other nominees. It is a truly amazing line-up of agencies and individuals. I am proud to personally know every one of them.